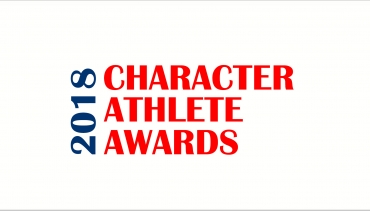 Selecting just one female and one male winner from the over 50 submissions is a difficult task, but these two individuals stood out for their commitment to OFSAA’s values of leadership, equity, respect and sportsmanship. Each winner will receive a $1,000 grant from Jostens and a commemorative plaque to recognize this outstanding achievement.

Chloe is a grade 11 student at Leamington District Secondary School in Leamington, Ontario.

In just her first three years in high school, Chloe’s accomplishments in the community and her school’s athletic program are extremely impressive. In early May, she won gold in the C Flight at OFSAA Badminton and she is a member of the school’s strong softball team this spring.

Chloe’s standout play on the Junior and Senior Volleyball team earned her the Rising Star Award in Grade 9 and Team Captain and Sportsmanship Award in Grade 10.

Chloe excels at badminton. She went undefeated in Girls Doubles in Grade 10 and won county ECSSAA/SWOSSAA in Grade’s 9 and 10. For her performance and dedication, she earned the MVP Award in both Grade 9 and 10 and she was also named the school’s Junior Female Athlete of the Year in 2017.

Chloe currently serves on the Corporation of the Municipality of Leamington’s Mayor’s Youth Advisory Committee as the voice of youth and Youth Empowerment. Chloe volunteers weekly with the Special Olympics Ontario local swim team and she works part-time as a Youth Program staff member with the Corporation of the Town of Leamington. Chloe has also participated in the Multiple Sclerosis Society of Canada walk for several years.

A member of the NCCP, Chloe has completed the Coaching Athletes with Disability course and she serves as a volunteer coach for the Leamington-Essex Warriors Special Olympics swim team.

Congratulations on the OFSAA Character Athlete Award for 2017-18, Chloe!

Ben has been an active participant across several sports throughout his high school career.

After playing for the Midget basketball team, Ben would go on to play Junior and Senior football, basketball and badminton. His athletic prowess led him to a spot on the Varsity baseball and touch football squads as well.

In the community, Ben is a two-year member of a program called D.R.E.A.M.S. (Dominican Republic Educational and Medical Supplies). Ben and this student group made two trips to rural Dominican Republic and provided building supplies and helped in the building a home for a needy family.

Ben takes time out to coach a youth house league team in the school’s Saturday Newman Youth Basketball program and he is also a Summer Camp Counsellor at Cardinal Newman. He also holds this role at two other local community summer camps.

Ben’s leadership was recognized in 2017 when he was the recipient of the Jeff Dickins Memorial Award. This distinction was earned from his excellence in sport, the classroom and in the community.

An honour roll student in each year of high school, Ben is a reliable volunteer as a referee for feeder school tournaments.

Congratulations on the OFSAA Character Athlete Award for 2017-18!