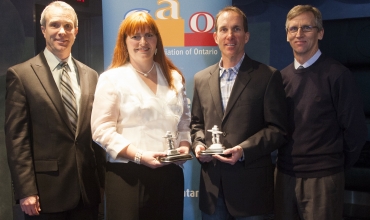 OFSAA congratulates Tammy Short of West Park Secondary School in St. Catharines and François Belle-Isle of L’École secondaire catholique régionale de Hawkesbury for receiving the Coaching Excellence Award in the school sport category.  These awards are presented annually by the Coaches Association of Ontario and this year’s ceremony was held on April 13 at the Scotiabank Theatre in Toronto.

The selection of recipients (one male and one female teacher-coach) is based on their unique contribution to sport through continuous development of new coaches. The nominated coach must have influenced the development of new coaches and have shown evidence of program building as well as encouraging athletes to give back to sport. Furthermore the nominated coaches’ coaching style has proven to be ethical, demonstrated sportsmanship, and contributed to the “education through school sport philosophy”.

Tammy Short began teaching and coaching at West Park 14 years ago.  Since then she has coached volleyball, badminton, softball, track and field, and tennis.  In addition to her work as director of athletics, Tammy has lent her time, skills, and expertise to numerous groups and committees, including school athletic councils, local sport organizations, and fellow coaches.  She emphasizes the life skills that students and athletes develop through sport, regardless of the level of competition.  Despite having a team of her own at home – five children – and a time-consuming family business, Coach Short somehow finds time to compete in volleyball and basketball.  A colleague of Tammy’s said, “Tammy will never let a team down.  If there are students that want to play, she will be there to make it happen.”

Through sport and physical activity, François Belle-Isle teaches students perseverance, determination, passion and commitment.  An athlete himself, François practices what he preaches:  a healthy and balanced lifestyle.  François has spent innumerable hours coaching basketball, soccer, nordic skiing, football, and track and field, establishing a far-reaching track record of success over the past twenty years.  In addition to teaching, coaching, and convening, he has mentored fifteen student-teachers from different Faculties of Education.  One colleague said, “Even after 15 years of teaching and coaching, François still has the fire of a first-year teacher, mixed with the wisdom and open mind of a veteran leader.”