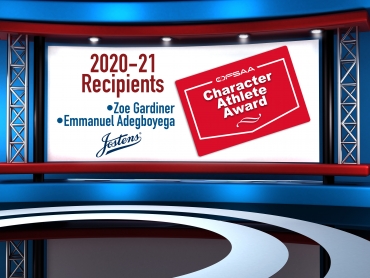 OFSAA's Character Athlete Award celebrates the efforts of the exceptional student-athletes in Ontario who best exemplify the characteristics that OFSAA is founded on.

Nominations come to the OFSAA office detailing the exceptional character of student-athletes from across the province. This year's recipients inspire those around them with their involvement on the playing field and in the classroom, in both school and community.

Selecting just one female and one male winner from the over 65 submissions is a difficult task, but these two individuals stood out for their commitment to OFSAA's values of leadership, equity, respect and sportsmanship. Each winner will receive a $1,000 grant from Jostens and a commemorative plaque to recognize this outstanding achievement. 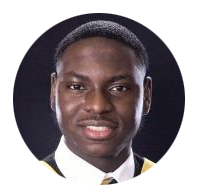 Emmanuel is a grade 12 student at Chaminade College School in Toronto.

He sets a high standard for all student-athletes in the province. During his high school career, Emmanuel has participated in track and field (team MVP and a Metro Region Jr. Discuss Champion), basketball and football. He was a two-year captain of the 2019 Metro Bowl Football Champions.

Emmanuel’s leadership qualities blossomed with his involvement in the school’s Science, Technology, Engineering, Mathematics (STEM) program. He’s also enrolled as a Specialist High Skills Major (SHSM) student in the business sector. Within that program, Emmanuel did a Co-op Education placement with the Toronto Police Services. When the placement was completed and 220 volunteer hours were gained, he was offered a summer placement with the Toronto Police. He saw this as an opportunity to work with police in his neighbourhood with the intent of bridging the gap between his peers and law enforcement. His involvement earned him a Toronto Police Services Appreciation Certificate.

He’s also a team member on the Stop The Stigma Team – a group of students that assists with mental health issues. Emmanuel has also been a coordinator for Jake’s House which is an organization that helps families and children with Autism.

He’s been an active member of Student Council since grade nine and eventually became the Student Council President for three consecutive years. As President and co-founder of the Black History Committee, Emmanuel used his position in a predominantly white school to educate his fellow students and staff regarding a very sensitive issue. Emmanuel has advocated for social justice and equality through interviews with the Toronto Star, Global News, the Catholic Register and various podcasts. Through these platforms, he advocates for justice, freedom, peace, and equality during the ENDSARS Movement in Nigeria. He has even spoken to the Minister of Education about ways to ensure the growth and development of youth. He got involved with school teams and organizations because of his love of his school community and sport.

Emmanuel’s authentic qualities of leadership are evident when speaking to the parents and teachers of grade 8 students and he tutored students who were having difficulty in grade 9.

Emmanuel gave support to the annual Thanksgiving food drives and the school community’s Brothers For Baskets campaign that assists local families at Christmas.

Emmanuel is the embodiment of OFSAA values. It gives us great pleasure to recognize a student who has worked to create an atmosphere where all students are provided with an equal opportunity to learn and grow. Congratulations! 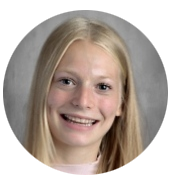 Zoe is a grade 12 student at Glebe Collegiate Institute in Ottawa.

Zoe has been a member of Student Council in each of her four years of high school, serving the last two years as secretary. The past two years, she also served on the Link Crew - helping grade 9 students integrate into the school. Zoe was a driving force behind Glebe’s Mental Health Initiative by hosting information sessions, workshops and the information fair. This past year, she was instrumental in organizing Mental Health Panels, which strove to help students dealing with issues related to the pandemic and online schooling. Zoe also spearheaded the school’s first annual Sexual Assault Campaign to raise awareness and support victims of sexual assault.

As co-founder, Zoe has also volunteered within the community in various fundraising roles, including an Annual Holiday Craft Sale. This event has raised over $10,000 in the past five years for various causes such as KidSport, Crock-Pot, Harmony House Women's Shelter, the Ottawa Hospital and a reconciliation village in Rwanda.

Zoe has also been awarded an Award of Honour for Leadership and Philanthropy by the EFL, EDI Football and Kabaddi League in Punjab India for her efforts in raising over $6000 to help set up a Sport Development Centre for girls in Pasla, India. Prior to her trip, she collected over 250 pairs of new and used cleats to be donated to young players in Rurka Kalan.

Zoe is a strong, charismatic young woman whose quiet example and work ethic naturally make her a leader amongst her peers. Zoe's countless hours of service to helping others had a great impact within her school, community and around the world!

While soccer is her passion, she committed to running Cross Country to help her friends and teammates since she was initially a reluctant runner. For two of her three years (the fourth lost due to Covid), she was the top scorer on the OFSAA XC team that won consecutive gold at the OFSAA Cross Country Running Championships. Since the pandemic hit, Zoe continued to use running to maintain and improve her fitness for soccer.

Zoe works hard to ensure others have equal opportunities as evidenced by her work in India, and she strives to ensure everyone is respected and valued. She has initiated a sexual assault campaign and has raised funds for Harmony House, a women's shelter, showing her desire to help those that need an opportunity to heal and be nurtured in a culturally sensitive, accessible and healing environment. As a member of student council, she has helped with an initiative to create gender inclusion by promoting the use of pronouns, both within the classroom and online.

Whatever task Zoe undertakes, she does so not only to learn and develop into a strong student-athlete, and person, but to assist others in helping them to be the best version of themselves. Congratulations!