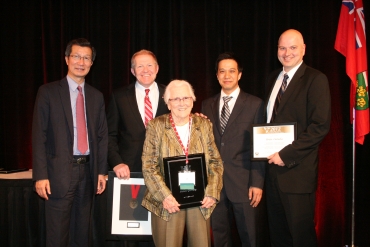 Martin Ritsma, Syl Apps Award
Martin Ritsma, current principal of Stratford Northwestern Secondary School, is this year’s recipient of the Syl Apps Volunteer Achievement Award. During his teaching career he was a volunteer teacher-coach in the sports of basketball, soccer, rugby, volleyball, badminton, hockey and track and field for over 20 years. During these years, he also coordinated basketball tournaments and camps, convened locally and at the Association level, and coached city league basketball. He has also coordinated many international educational trips for student-athletes during his career to give them experiences beyond their own community

Despite his busy schedule when he entered school administration, he still found time to be totally involved in volunteer activities in his school, his local Association, in the Western Ontario Secondary School Athletic Association (WOSSAA), in his community and at the provincial level. Martin provided strong leadership for OFSAA in his roles as WOSSAA principal’s representative, vice-president, president, and past president of OFSAA. In addition he has convened six OFSAA championships and served as a member of the Transfer Committee. Currently Martin continues his involvement with OFSAA as the chair of the Canadian Sport for Life Committee. OFSAA appreciates the time Martin has given to OFSAA and to school sport to make sure the young people in our schools have every opportunity to participate in sport in a safe and fair environment.

Helen Gurney, Sport Builder Award
Helen Gurney can be described as a pioneer and a true builder of women’s sport in Ontario. After graduating from the University of Toronto in the early 1940s, Gurney began a teaching career in physical education which helped launch her into several leadership roles with a variety of provincial and national organizations. At the time, sports were male-dominated, yet Gurney quickly became known as a respected educator, coach and basketball official. She inspired many young women to participate in sports and worked tirelessly to provide them with fair and equitable athletic opportunities. Gurney takes pride in women’s sports and the progress she has witnessed during her career. She published two books to record this: “A Century of Progress - A History of High School Sport”, and “A Century to Remember - 1893-1993: The Story of Women’s Sports at the University of Toronto”.  She has been a mentor for young women, teachers, and coaches and has always encouraged them to strive for excellence.

In 1951, Gurney was on the founding Board of the Ontario Federation of School Athletic Associations (OFSAA) and the only female member of that group. Later, as a Ministry representative to OFSAA, she continued to advocate for strong athletic school programs, more women in leadership positions, and fair and equitable competition for all student-athletes. Throughout her career Helen Gurney has been a true friend to sport and her efforts have built and strengthened many organizations and programs. Helen is a very deserving recipient of the Sport Builder Award.

Yonex Canada, Corporate Citation
Yonex Canada has been a strong supporter of OFSAA and specifically high school badminton for over 14 years.  During this time, Yonex has been the official racquet and shuttle of OFSAA, providing support, both financial and in-kind, annually to the OFSAA Badminton Championship.  In addition to providing all shuttles for the tournament, Yonex arranges for representatives to be available on-site to re-string and re-grip racquets.

Having Yonex support and general presence at our championship has added to the overall atmosphere and made the event feel that much more special for the student-athletes and teacher-coaches in attendance.  OFSAA is pleased to have a strong supporter of high school sport involved with our championship and would like to express our thanks for their continued partnership over the years.