OFSAA Football rumbled through Hamilton for the 2015 Bowl Games series with a newly formatted schedule fit for a newly minted stadium at Tim Horton’s Field.

At a press conference announcing the Bowl Series, representatives from OFSAA, the City of Hamilton, McMaster University, and the Hamilton Tiger-Cats spoke to the values of high school sports while members of the CFL, Fox 40 and radio and television news media attended.

Starting 2015 OFSAA has brought back the Bowl Game names; Metro Bowl, National Capital Bowl, Weatern Bowl, Northern Bowl and Golden Horseshoe Bowl. In addition to the return of these traditional Bowl Game names played since 2000, OFSAA has named its other four Bowl Games. In 2013 OFSAA Football Bowls expanded from 10 to 18 teams and from one day to three days to incorporate representatives from each region of OFSAA’s athletic associations. The new bowls will be called; Eastern Bowl, Independant Bowl, Simcoe Bowl, and Central Bowl.

Two associations’ teams represent each Bowl Game region. For example the Metro Bowl has TDSSAA and TDCAA teams. Each year the two teams will rotate for their chance to capture and defend their own association title. Their challenger is drawn at random. The other team not chosen to defend the title of their own Bowl game will have the opportunity to play against another association at random to capture their title. Kind of like “Capture the Flag.” 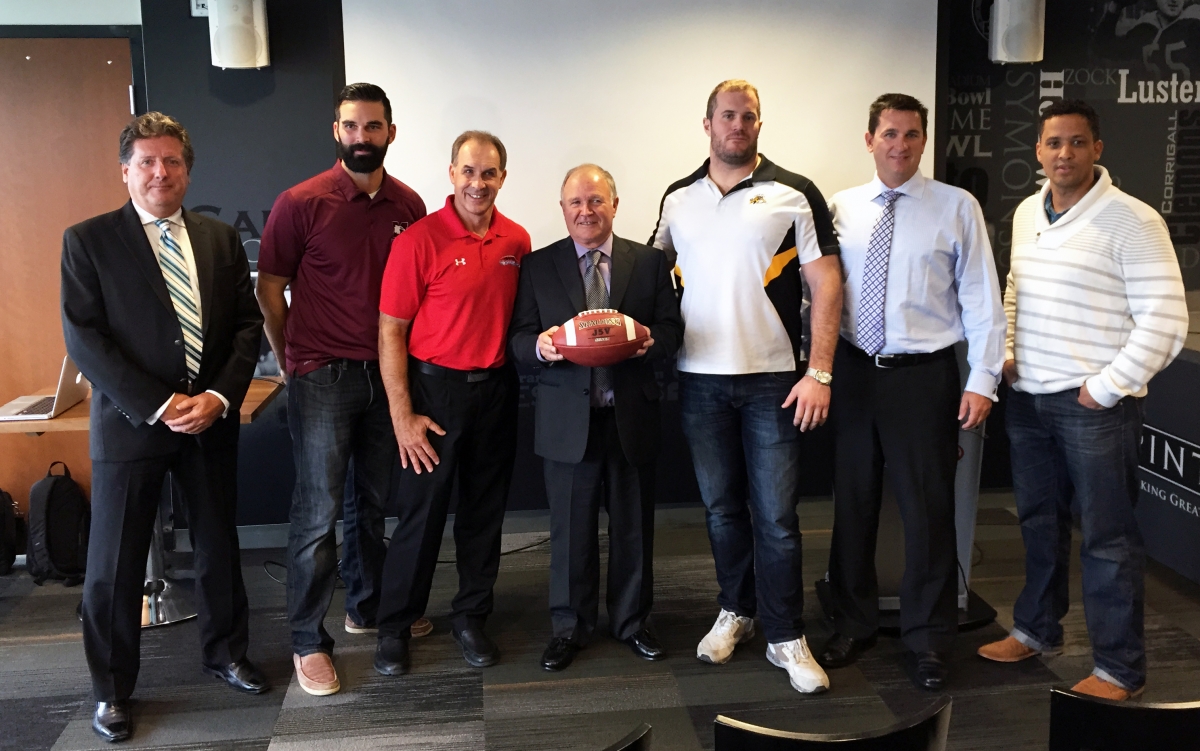 QUOTES FROM THE PRESS CONFERENCE

“I’m really excited to have this here finally and see the looks on the kids faces when they see the stadium.” – Ward Dilse, City of Hamilton Sports & Entertainment Facilities

“On behalf of the city council and mayor I’m excited to make this announcement. The city’s spirit in supporting sports will be clear.” – Matthew Green, City Councillor (Ward 3)

“For high school students it’s very special and something they won’t forget and we want to give them this life experience for education through school sport. We love this facility and excited to use it.” – Peter Morris, OFSAA Football Coordinator

“It’s a great opportunity for these kids to have this experience and also showcase what they can do on the next level” – Jon Behie, McMaster Assiatant Coach

“It reminds me of my best friends, the guys I played football with in high school and its efforts like these that OFSAA puts on to provide these experiences that these young guys will remember forever” – Brian Bulcke, Hamilton Tiger-Cats Defensive Lineman

For further information please refer to the OFSAA Football website for information as it becomes available or contact;