The Windsor Star covered the Championship including this article by Jim Parker chronicling one team’s unlikely run.

LASALLE — Instead of two days and out, the Villanova Wildcats took fans on a wild four-day ride.

But Villanova’s battle for OFSAA gold at the boys’ AAA hockey championship came up short in Thursday’s final game.

The No. 1-seeded Peterborough St. Peter Saints took the gold with a 4-0 win over the Wildcats before nearly 1,000 fans at the Vollmer Complex.

“It’s frustrating, but in the end, we just wanted to be here and we’re extremely proud of what we did,” Wildcats captain Ernie Godden said.

Thursday’s silver medal was no small feat for a Villanova team that only got into the event as the tournament host after being dumped in the WECSSAA final.

The reward for entry was the 16th and last seed in the tournament.

“There are 750 high school hockey teams in Ontario that would love to be here,” St. Peter head coach Steve Stanlick said. “No, that’s crazy (the 16th seed made it). That’s a testament to how well Villanova played.” 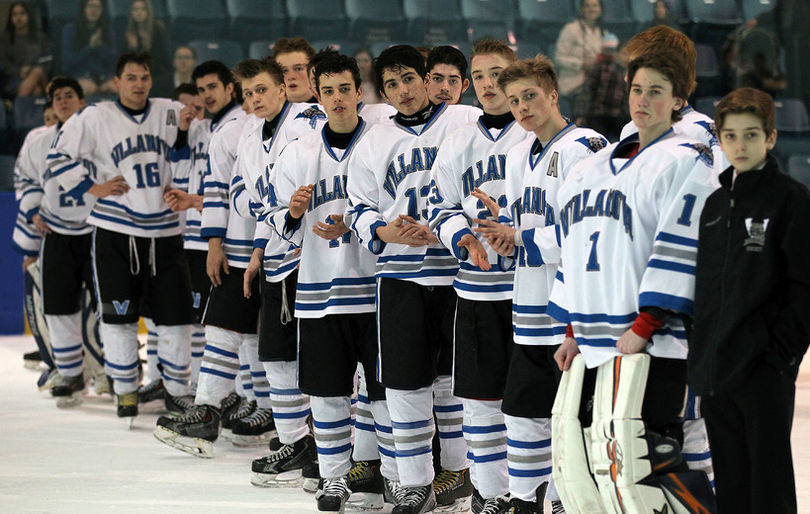 The Wildcats took out the No. 3 seed and the No. 5 seed in preliminary play to win their pool. “A lot of people were expecting us to go 0-3 in this tournament,” Wildcats goalie Lucas DiLuca said.

“We played a lot of great teams and beat them.”

Earlier Thursday, Chris Francia and Jacob DeLuca scored in a 2-1 win over No. 13 Sault Ste. Marie St. Mary’s College to send the Wildcats to the gold-medal game for the first time ever.

It sent Villanova students scrambling to get their parents to sign notes in order for them to get out of school as they raced to make Bristol board signs to cheer on their favourite players.

“I’m been trying to get to this thing for 17 years and you don’t want to waste an opportunity like this,” Wildcats head coach Grant O’Keefe said.

But a roster with eight players in Grade 9 was simply overmatched and out of gas against the Saints, who claimed their second OFSAA title in four years and their third podium finish over that time.

“Honestly, we just got outmatched,” DiLuca said. “What can you do at this point? It’s just a tough game. These guys played awesome and we didn’t have it in us. We just couldn’t win that last game.” 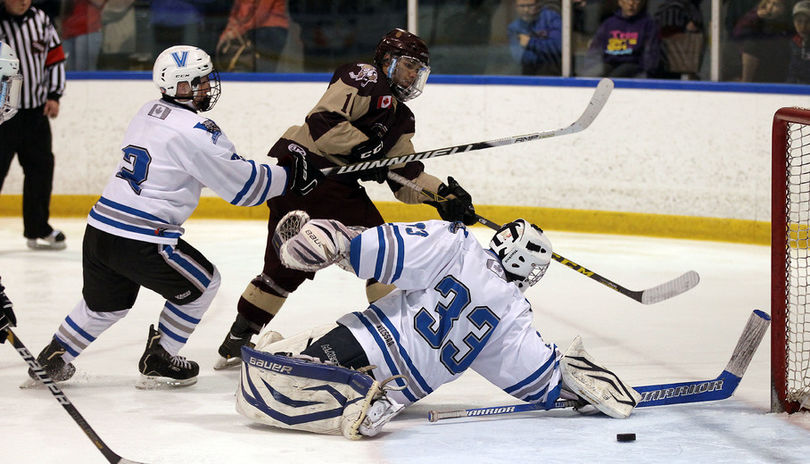 The Saints got an early lead, played disciplined without taking a penalty in the game, and never opened a door for the Wildcats to slip through — the Cinderella story never got the golden finish.

“You always start to believe,” Godden said of hopes going into the final. “In my heart, it’s always going to be a Cinderella story because you never think this would happen, especially with the team that we had.”

It will take weeks for the Wildcats to put this accomplishment in perspective and O’Keefe was doing his best to convey that to players after Thursday’s loss.

“Really, you can’t be disappointed when you exceed expectations,” O’Keefe said. “It’s when you come up short that it’s heartbreaking.

“I’m already pretty good with it. Coming in second with the lowest-ranked team, the youngest team by a mile, I’m pretty proud.”

The silver medal will no doubt be a golden moment talked about at Villanova and among players for years to come.

“Right now, it’s deflating,” DiLuca said. “In a few weeks from now, we’re going to look back and say, ‘We got silver in OFSAA and we weren’t even supposed to be close to this.’”