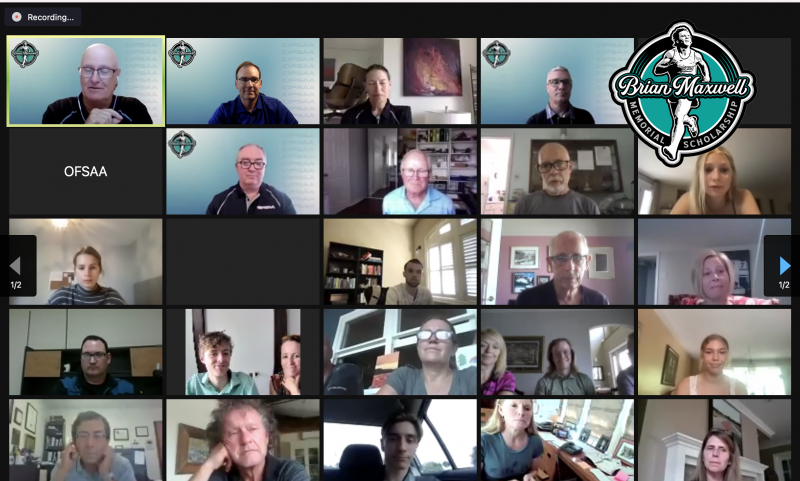 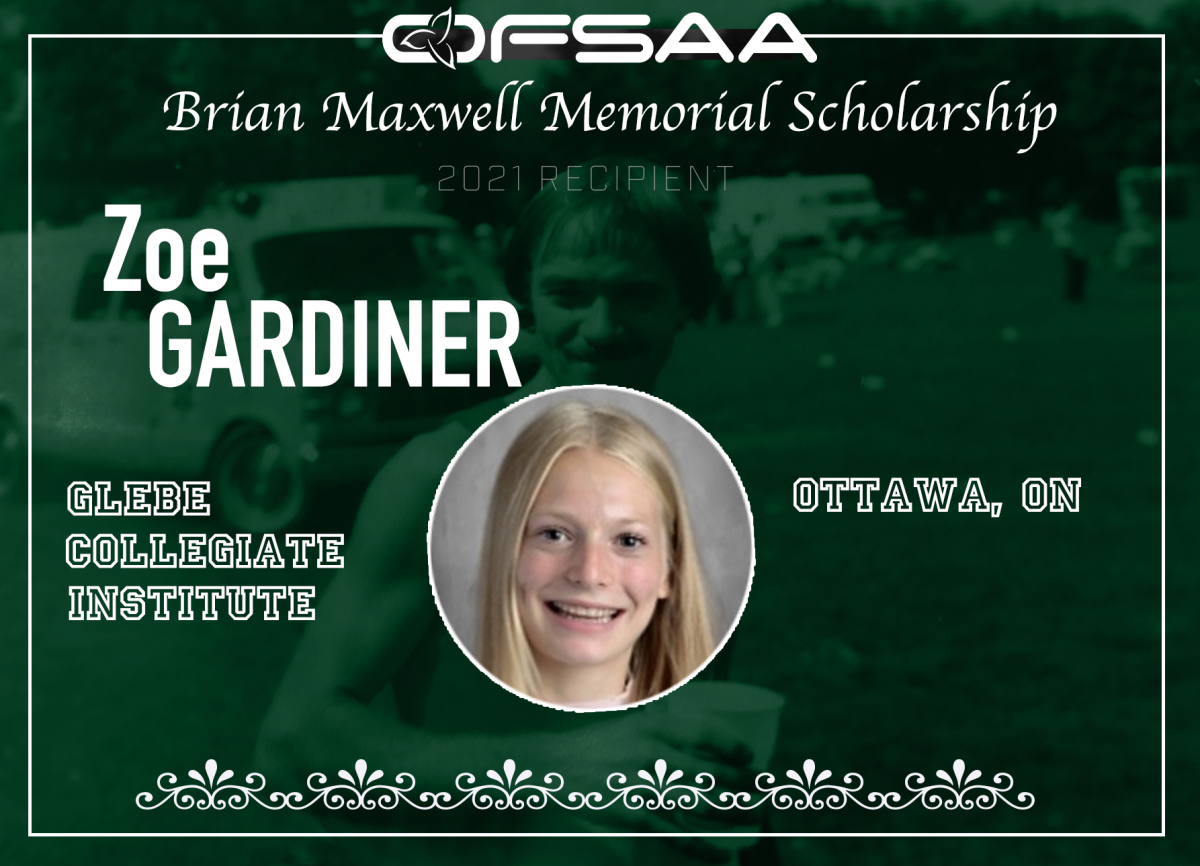 Zoe Gardiner is a six-time qualifier for OFSAA, three in Cross Country and three in Track and Field. She was a key member of her school’s OFSAA Championship XC team in 2017 and 2018. In 2019, her school finished 5th, capping a terrific XC career. Her best individual result was 6th in the Senior Girls 1500m in Guelph in 2019. Academically, Zoe achieves as well in the classroom as she does in running.

Zoe will be attending McGill University in the fall, where she will be enrolled in the Faculty of Science, with the goal of graduating with a BSc in Biology.

At Glebe CI, Zoe has been involved in Students’ Council for all of her years in high school. She was also a member of the school link crew, which supported the transition of incoming grade 9’s to high school, as well as working with students to ensure they are doing okay. She is also a member of their mental health committee and was a founding member of a campaign initiated by the school for sexual assault victims.

In her community, Zoe was the co-founder, organizer and participant of a non-profit in 2015. She has raised over $10,000 for various charities such as KidsSport, a Crock-pot program, Ottawa Hospital for Cancer research, a women’s shelter and a reconciliation village in Rwanda. She also has been heavily involved in an initiative to get young female soccer players from around the world to support and share in the empowerment of women through discussion panels, workshops and awareness/exchange programs. Finally, she found the time to be a volunteer soccer coach at a number of Ottawa area soccer programs and at the National Track and Field Championships.

Perhaps her greatest achievement is the Award of Honour she and her teammates received for their leadership and fundraising of over $6000 to set up a sports development centre in Pasla, India.

She is described by her coach as being compassionate, selfless, and hard-working. Always striving to help others be the best they can be, all the while doing the same for herself. 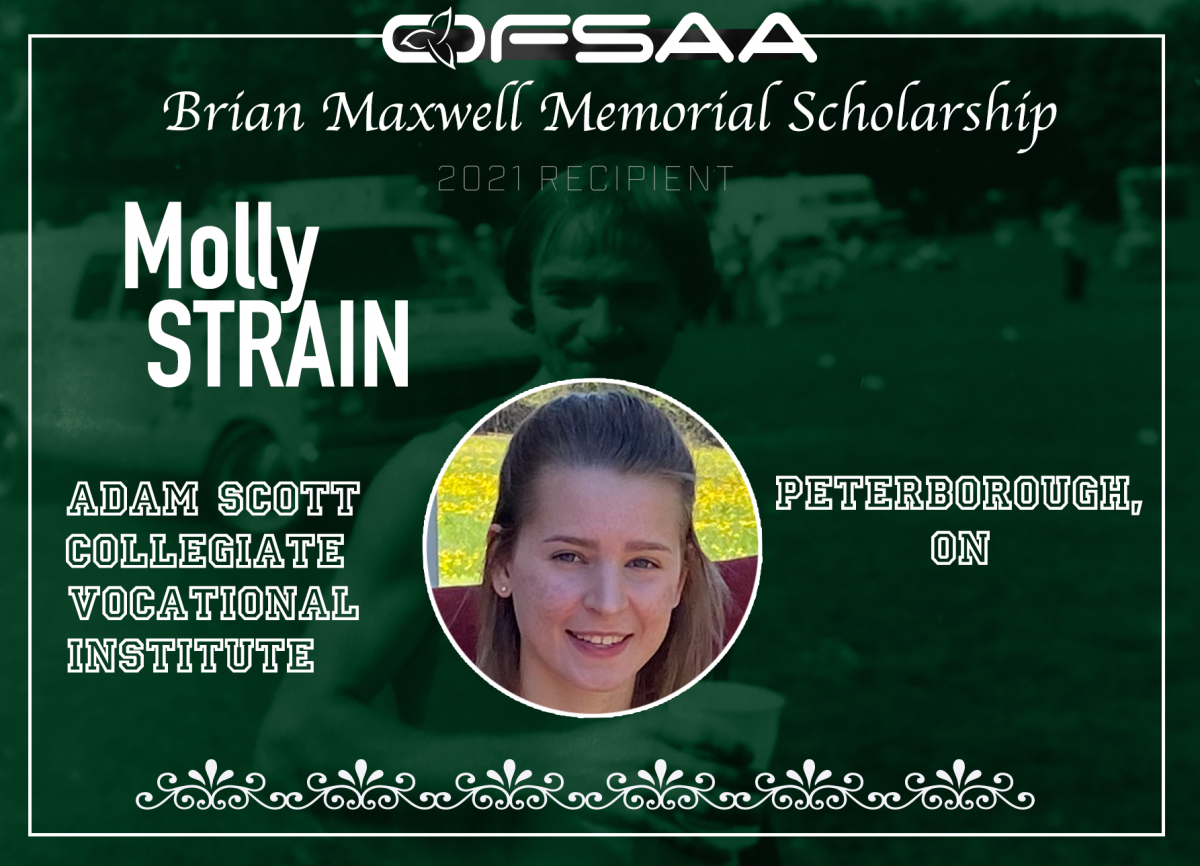 Molly Strain is a seven-time qualifier in cross country and track and field. As a Grade 9 student, she placed 3rd in Open Girls 1500m Steeplechase and MG 3000m. In Grade 10, she was the OFSAA Champion in the first time held Open Girls 2000m Steeplechase. She came back the next day and was 6th in the Junior Girls 3000m. In cross country, her best placement was 9th in her grade 9 year and as a first-year senior, she was 11th.

As with all of our nominees, Molly excels in the classroom as well, where she is a high achieving Ontario Scholar.

A well-rounded athlete, Molly has played rep soccer and has been a nordic skier. She was named one of the top-10 athletes in Peterborough in 2019 and was nominated by her community for the INSPIRE: The Women’s Portrait Project.

This fall, Molly will be taking her talents to UBC for Kinesiology, where she will run for their XC and T&F teams.

In her community, Molly has volunteered at the Lakefield Animal shelter, taking care of animals. She has also volunteered at a horse stable, caring for horses, supervising kids learning to ride as well. She also assisted with the Peterborough City Soccer Camp and elementary volleyball tournaments.

She is described by her coach as someone who has the kind of intestinal fortitude rarely seen among teenagers. She is a young athlete that her peers and coaches can see wearing the a Canadian singlet internationally in a few years. 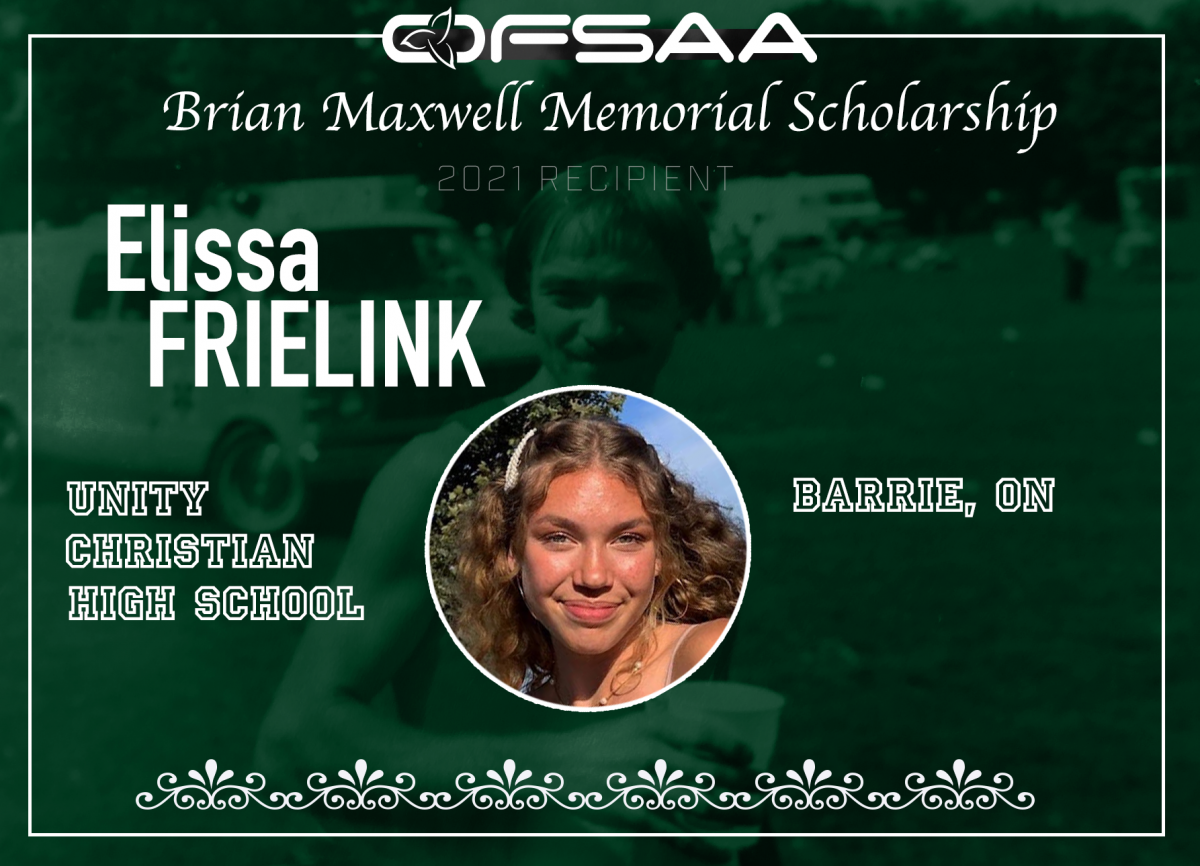 Elissa Frielink is a Grade 12 student at Unity Christian High School in Barrie, where she has been a valued member of her school’s cross country and track and field teams, in addition to achieving high grades in her studies.

At school, she has been on basketball, volleyball and badminton teams. She volunteered with school plays and officiated in track and field meets at her school for elementary students. She was also involved with a school bible/prayer group.

In her community, she has been active in her church, from caregiving to young children during church, to teaching Sunday school lessons and working at a bible camp in the summer. She has also worked with her ‘Serve’ mission group, working in communities with landscaping needs and daycare. She has also been involved with the City of Barrie’s rec programs, teaching at various sports programs.

Her coaches and teachers laud her positivity, enthusiasm and overall athletic ability.

She will be attending the University of Victoria this fall, enrolled in the English program. She will be running for the Vikings on their Cross Country and Track and field teams! 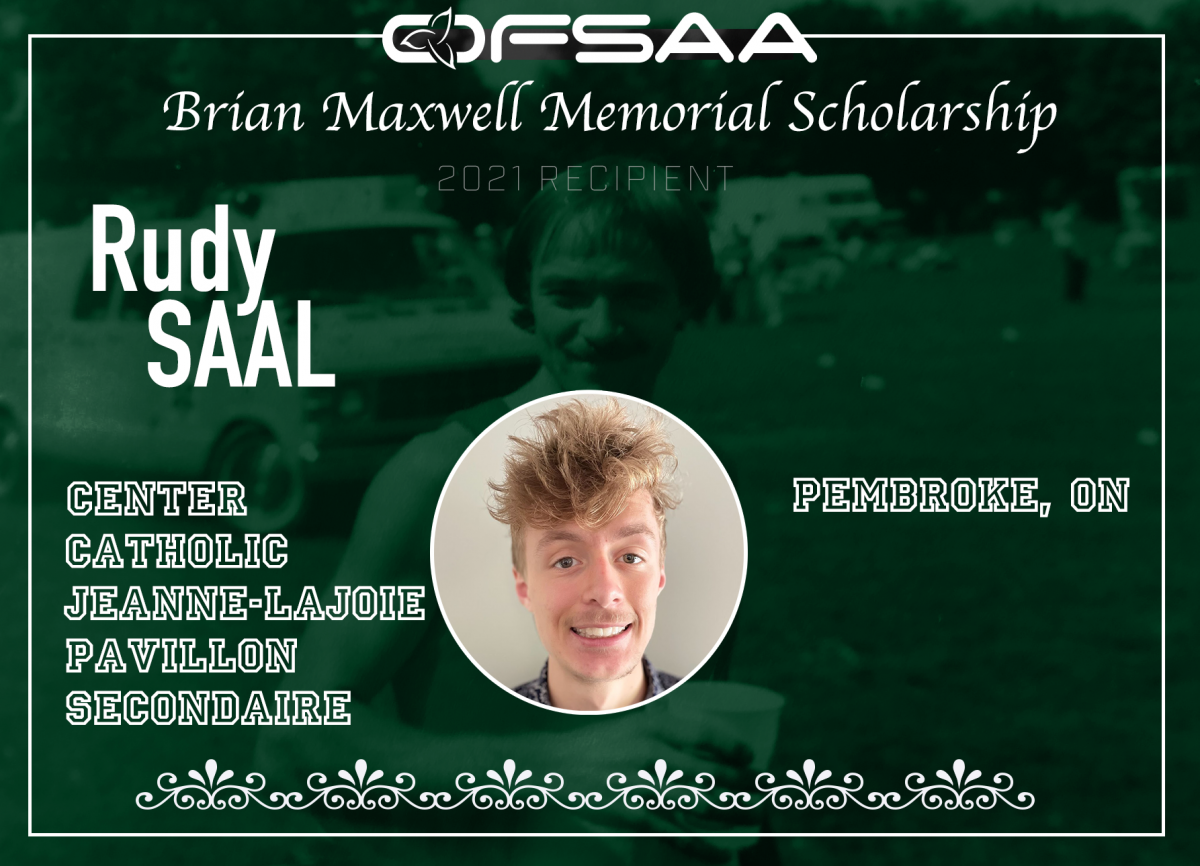 Rudy Saal hails from Pembroke, where he attends C.s.c. Jeanne- Lajoie, Pavillon secondaire.  Rudy is a seven-time OFSAA qualifier in both XC and T&F. He won a silver medal in cross country in both grade 9 and 10 and was 12th in his first year of senior. On the track, he was second in the Junior Boys 3000m and 4th in the 1500m in 2019 and was 3rd and 6th in the same events in his grade 9 year.

He carries a mid-90’s overall average in his 4U courses. He will be taking his talents to Laval University in Quebec this fall where he will be enrolled in Mechanical Engineering and running for their XC and T&F teams.

Around his school, he has been involved in student council, played numerous other sports and participated in countless musicals and school plays. Music and acting are one of his passions, having performed in plays and in community events.

Rudy is proud of the nearly 200 community service hours he completed with various groups.

He strives to be a well-rounded person, with various interests. He very much is looking forward to the challenges of improving his french language skills as a student at Laval and representing their school in USport XC and T&F.

His coaches characterize him as a hard-working runner who leads by example and is a positive influence through his words and his actions. 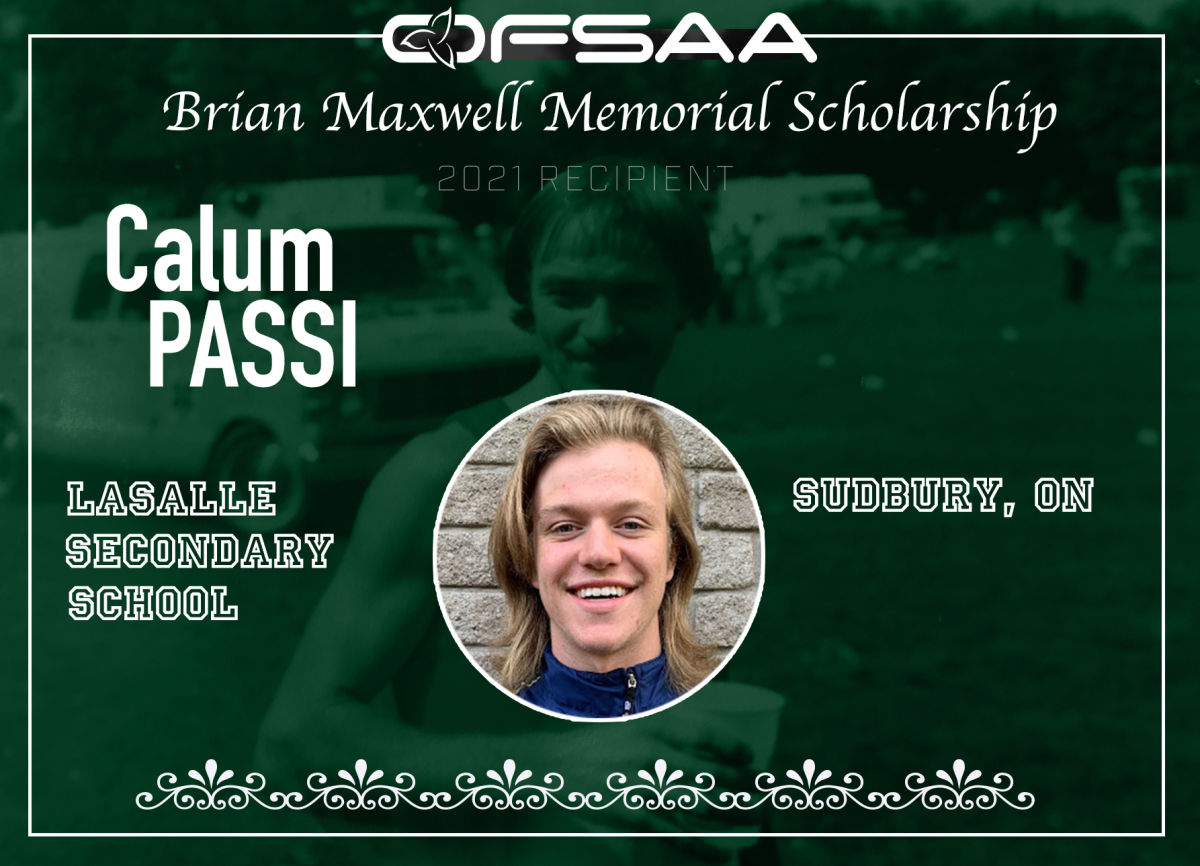 Sudbury, and specifically Lasalle Secondary School is where Calum Passi hails from. Calum is a graduating student who will be entering Laurentian University, where he will be taking engineering and running in their XC/ T&F program.

Academically, Calum is a high honours roll student and has been actively involved in the Green Club, focusing on environmental issues, as well as youth empowerment.

Calum has been heavily involved in community work, having worked with the Eastern Star, serving meals. He helped organize a Me to We fundraiser to raise awareness of a lack of sanitary water. He travelled to Kenya to assist in the construction of a boys’ dorm in the Masai Mara region.

Calum has been recognized by the Rotary Club of Sudbury for his youth leadership and by his school as a Most Outstanding Student and Valedictorian.

He is very proud of himself for what he has learned through sport, both through success and adversity. He has overcome injuries and other obstacles, and in each case, he met those challenges with open arms and grew from them. He espouses the attitude of Brian Maxwell by giving his best and leading by example, others will follow. 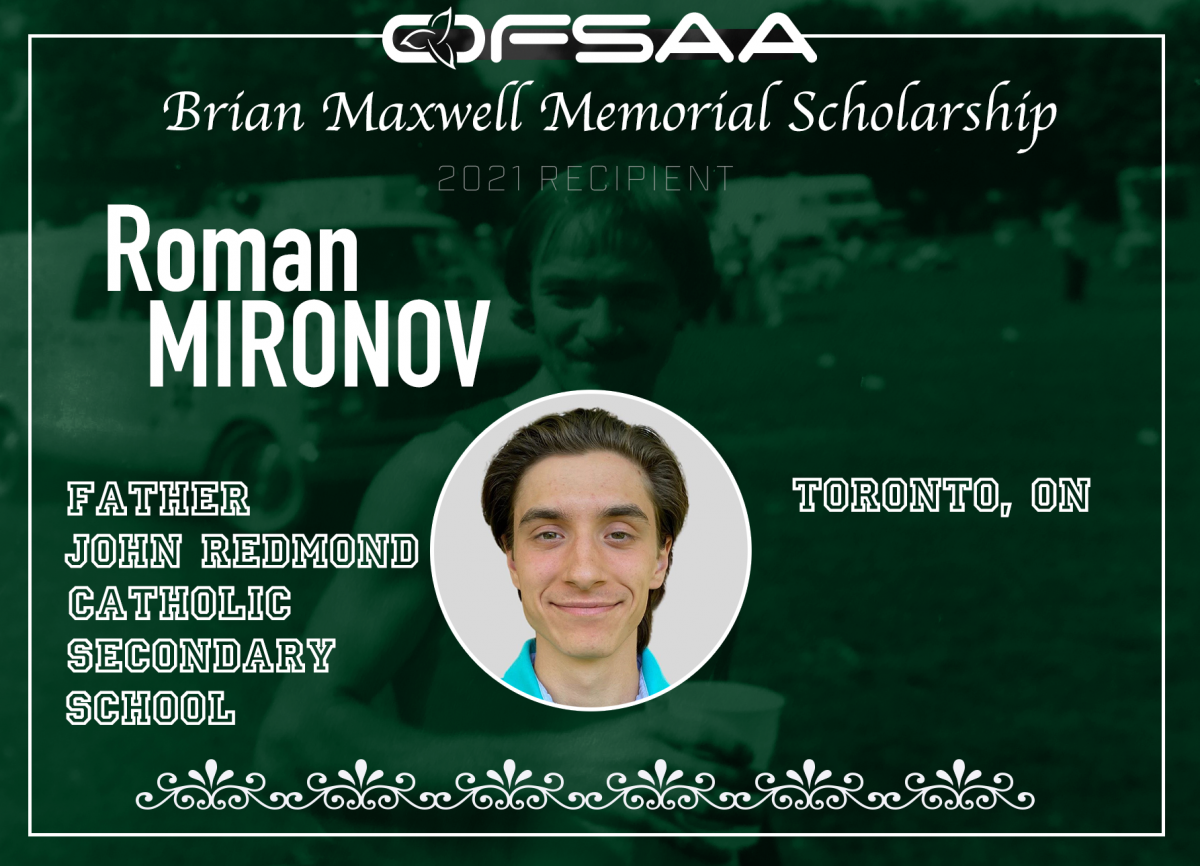 Roman Mironov is a Grade 12 student at Father John Redmond CSS in Etobicoke.

He has distinguished himself through his studies where he maintains an honour roll status. He has been involved in his school’s student council throughout his high school years, and currently he is President. He has also been heavily involved in leadership at the school, having been on his school’s leadership team in all four years. He also has been involved in Redmond’s Drama program, appearing in three plays in various roles.

Roman has had a very successful OFSAA running career, qualifying five times. He was the OFSAA Cross Country champion in grade 9 and was third in grade 10. Unfortunately, as a first year senior, he was ill and did not finish. On the track, he was 2nd in the 3000m, and 4th in the 1500m in grade 9.  He lost his grade 10 year to injury.

Among the accomplishments he has had in his young life so far, one that stands out is his completion of his apprenticeship in the skilled trade of hair cutting. He began when he was 13 and this skill has taught him many things that will serve him well in the future. He also is very proud of the work he led his student council and cross country team in raising money for breast cancer research in the community. For every kilometre his team ran in one weekend, $1 would go to this charity. Under his leadership in this position, the student’s council did raising money for Movember, providing Christmas cards for Covid-19 patients and putting together virtual activities to help students cope with mental health concerns during the pandemic.

This fall, Roman will be attending Queen’s University, where he will be taking Commerce and running for the Gaels Cross Country and Track & Field team.