Returning From A Concussion: How Soon Is Too Soon?

“According to a report in the Toronto Star, young Canadian tennis player Eugenie Bouchard was walking over a freshly mopped floor in a dark training room late after a press conference when she slipped backward, smacking her elbow and head on the tiled floor. The next day she was forced to withdraw from the US Open, her most successful outing in over a year, after being diagnosed with a concussion. Eugenie is one of an estimated 39,000 (110 in 100,000) Canadians who will report suffering a concussion this year, although the actual number is probably higher because concussions tend to be underreported. American studies show that youth (under 20 years) most often sustain a concussion while participating in some sport or recreational activity (30–50 per cent). Activities like football, ice hockey, soccer, bicycling, rugby, basketball, baseball and even playground activities have reportable incidence rates. In high school athletes, the not-so-surprising pattern is that participants in full-contact sports (football, rugby, hockey, lacrosse) have higher rates of concussion than sports in which player-to-player contact is not the focus but frequently occurs (e.g., basketball, soccer, etc.), and that low-contact sports (volleyball, baseball, tennis, etc.) have the lowest rate of concussion. Motor vehicle accidents and falls are the next-most common mechanisms of injury in youth.

Concussion is a form of traumatic brain injury that results from the brain being shaken forcefully. A concussion can come either directly from a blow to the head, or indirectly from a force applied to the body that causes the head to rotate forcefully (e.g. whiplash). These forces cause the brain to quickly compress against one side of the skull and then rebound to the opposite side, leading to potential bruising to the surface of the brain and to the underlying neural tracts connecting different parts of the brain to each other. This initial injury can ignite a series of complex physiological events in which there is a release of the neurotransmitters that permit communication between neurons, a restriction of blood flow, and an increased demand for energy in the form of glucose and oxygen. Altogether, this unusual state forms the physical and functional injury that is associated with the signs and symptoms of concussion.

The majority of concussions(1) are classified as mild injuries because they lead to little or no loss of consciousness. Concussion can be tricky to detect. To start, not everyone who hits the turf hard will suffer the symptoms of concussion. There is no biomarker (blood test or brain imaging technique) that can reliably detect the presence of a concussion, and so assessment continues to depend on symptom reports. The signs and symptoms of concussion may appear immediately or over the first 24 hours. The typical symptoms include any one or more of headache, dizziness, nausea, disorientation and/or confusion, difficulty with balance, fatigue, sensitivity to lights and sounds, difficulty focusing, difficulty with memory, and loss of emotional composure. The presence of any one of these symptoms after a traumatic incident involving the head is sufficient to insist that the child or adolescent break from their current activity, and if the symptoms fail to quickly abate or worsen, or if symptoms appear later in the 24-hour window, then immediate medical attention should be sought. These symptoms are typically documented using one of several standardized checklists and mental status exams. Assessment may include brain imaging (a CT or MRI scan) to rule out complications like skull fracture or brain bleeding (hematoma).

For most people diagnosed with concussion, symptoms typically resolve without treatment in 7–10 days, but in 10–30 per cent of cases (reports vary), more recovery time is needed. This prolonged period of recovery is most-often characterized by persistent fatigue, headache, sensory sensitivity, and difficulty focussing, and is referred to as persistent post-concussion syndrome (PPCS). It is very difficult to predict who will experience PPCS. One University of Pittsburgh study of high school football players found that players who reported on-field dizziness at the time of injury were six times more likely to experience a prolonged recovery (>21 days). Otherwise there appears to be no relationship between the nature of symptoms initially experienced and the duration of PPCS. Youth who fall into this category will likely be assessed with a full neurological and neuropsychological exam and, as outlined below, may benefit from a progressive rehabilitation program.”

To continue and read the full article please CLICK HERE 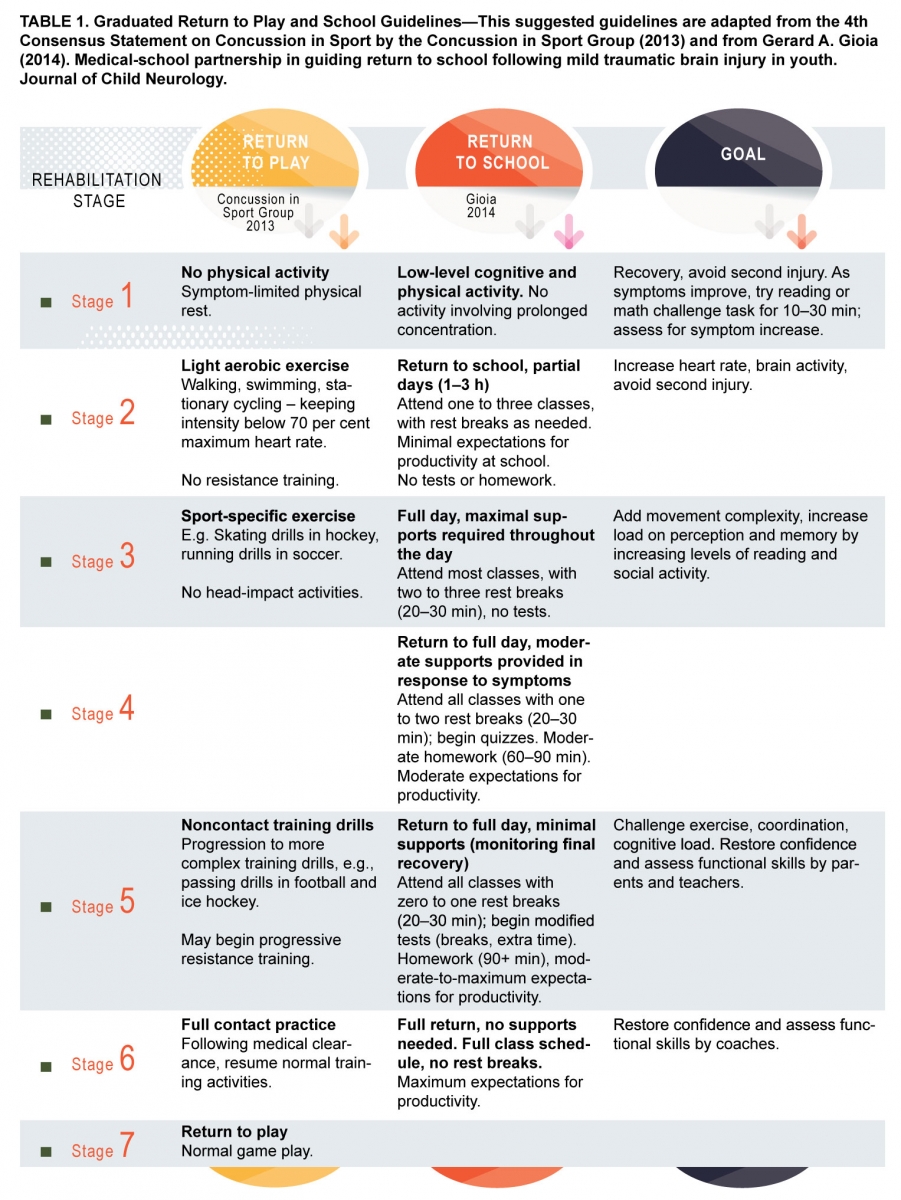