OFSAA and the Brian Maxwell Memorial Scholarship Fund are extremely pleased to announce the student-athlete recipients for 2018.

The scholarship fund is in memory of Brian Maxwell, a successful distance runner. Brian competed in track and field and cross country and achieved success as an OFSAA champion, and a Canadian junior, juvenile and senior champion. He also won numerous international marathons. In 1980, he was selected to the Canadian Olympic team and later became a successful entrepreneur who, with his wife, Jennifer, co-founded the nutritional supplement PowerBar. Brian was born with a defective heart valve and in 2004, at only 51 years of age, died of a heart attack.

The six recipients of The Brian Maxwell Memorial Scholarship each receive $5,000. These three female and three male student-athletes with a track and field or cross country pedigree in high school will continue their post-secondary education at a Canadian college or university. The scholar-athletes must also display qualities of honesty, integrity, compassion and an unwavering quest to accomplish the best academically and athletically while supporting fellow team members. These were all qualities of Brian Maxwell.

OFSAA is appreciative for the opportunity to partner with the Brian Maxwell Memorial Scholarship Fund each year to support students continuing their education in Canada.

For more information on the Brian Maxwell Memorial Scholarship and a listing of previous recipients please click here.

Please meet the 2018 recipients of the Brian Maxwell Memorial Scholarship: 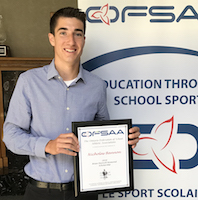 Nicholas took part in OFSAA Cross Country in each year of high school and he’s an accomplished runner across several competitions in the province. He also participated in basketball, volleyball, badminton, baseball and golf at his school and he served as Athletic Council President. As a Peer Mentor, Nicholas mentored a developmentally-challenged child student in a delayed class by assisting in both academic and athletic activities. He also helped Grade 9 students transition to high school as a LINK crew leader.

Nicholas is enrolled in the University of Guelph’s Bachelor of Commerce, Food and Agriculture Business. 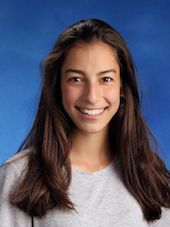 Sandra’s leadership in her sporting pursuits was evident by being bestowed the captaincy on her volleyball, badminton, soccer, flag football, track and field and cross country teams. She was also president of student council and a member of the group in each year of high school. Sandra takes great pride in founding the school’s peer tutor program for science and mathematics.

Sandra is an extremely active member of her community.  She enjoys being a swim instructor, a ski instructor, a lifeguard, a soccer convenor and a camp councilor. Fundraising is a priority that Sandra takes to heart. She has taken efforts to support Camp Oochigeas for children with cancer, charity basketball for underprivileged children, donation drives for victims of Hurricane Mara and clothing drives for immigrant and families in need of winter clothing.

Sandra will attend the University of Ottawa with the intention of earning a Bachelor of Health Sciences degree. 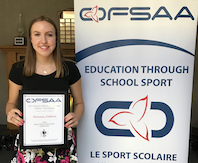 Hanna competed in the 1,500 and 3,000 metre events at OFSAA Cross Country in grade 11 and grade 12, respectively. She also competed at OFSAA in the triple jump category in 2017 and placed second in the competition. Hanna is a three-time city badminton champion and a four-time NOSSA medalist and she served as the captain of the school’s basketball team which captured a city championship and a NOSSA championship.

Outside of school athletics, Hanna is a peer tutor for younger students in French and Mathematics. She enjoys fundraising for the United Way Fund and coaching girls soccer.

Hanna is looking forward to her next chapter in life – studying Human Kinetics at the University of Guelph. 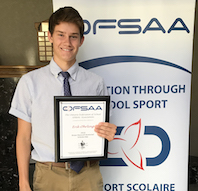 Erik Ohrling compiled a 95% and is a 2018 graduate of Collingwood Collegiate Institute.

Erik took part in cross country throughout most of high school and showcased his skills in OFSAA competition on three occasions.  He also managed to compete in the Nordic Ski Nationals in Thunder Bay and he was a member of his school’s soccer and swim team.

Erik can often be spotted coaching and refereeing youth soccer at the Collingwood United Soccer Club and he founded the “The Tech Tutor” which assists senior citizens with electronic devices. In addition, Erik also founded the “Peer To Peer Tutor Club”. Here, seniors meet with junior students to help with editing essays and preparing for exams.

The Ivey Business School (HBA) at Western University is the next stop for Erik as he continues his studies in the fall. 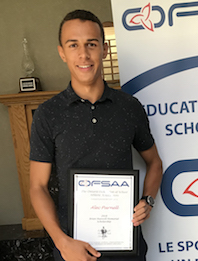 He has competed at OFSAA Cross Country in the 800 metre and 1500 metre races during his high school career. At Dundas Valley, Alex was a member of the badminton and swim teams and he enjoys playing the trumbone in the school band.

In the community, Alec assisted in shipping uniforms and sports equipment to Senegal while raising awareness and funds for the project called Senequip. As a Sports Fitness School Leader, Alec helps young children develop interests in track and field, soccer and wrestling. He enjoys developing reading skills for children by being a Hamilton Public Library Reading Buddy. Alec takes pride in being a sports program leader in the summer for the Dundas Baptist Church.

Alec also has his sights set on studying Human Kinetics at the University of Guelph in September.

Chloe Walker graduated from Vincent Massey Secondary School in Windsor with a 94% average.

Chloe’s dedication to cross country, track and field (steeple chase) and middle distance events all resulted in participation in OFSAA championships every year of high school.

Chloe is a member of SPECTRA – Sun Parlour Equestrian Therapeutic Riding Association – where she maintains stables, grooms horses and does equestrian riding with disabled children. She coached young autistic girls as part of the Spring Step Program at the Windsor Legion Track & Field Club.

Chloe is enrolled in nursing in the fall at the University of Windsor.