OFSAA and the Brian Maxwell Memorial Scholarship Fund are pleased to announce the student-athletes who were awarded the 2015 scholarships and Ontario Awards for Excellence.

The scholarship fund is in memory of Brian Maxwell, a successful distance runner. Brian competed in track & field and cross country and achieved success as an OFSAA champion, Canadian junior, juvenile and senior champion and won numerous international marathons. In 1980 he was selected on the Canadian Olympic team and later became a successful entrepreneur who, with his wife Jennifer, co-founded the nutritional supplement PowerBar. Brian was born with a defective heart valve and in 2004, at only 51, died of a heart attack.

The Brian Maxwell Memorial Scholarship awards $5,000 each year to a male and female student athlete in Ontario who will continue their post-secondary education at a Canadian College or University. These scholar-athletes must also display qualities of honesty, integrity, compassion and an unwavering quest to accomplish the best academically and athletically while supporting fellow team members. 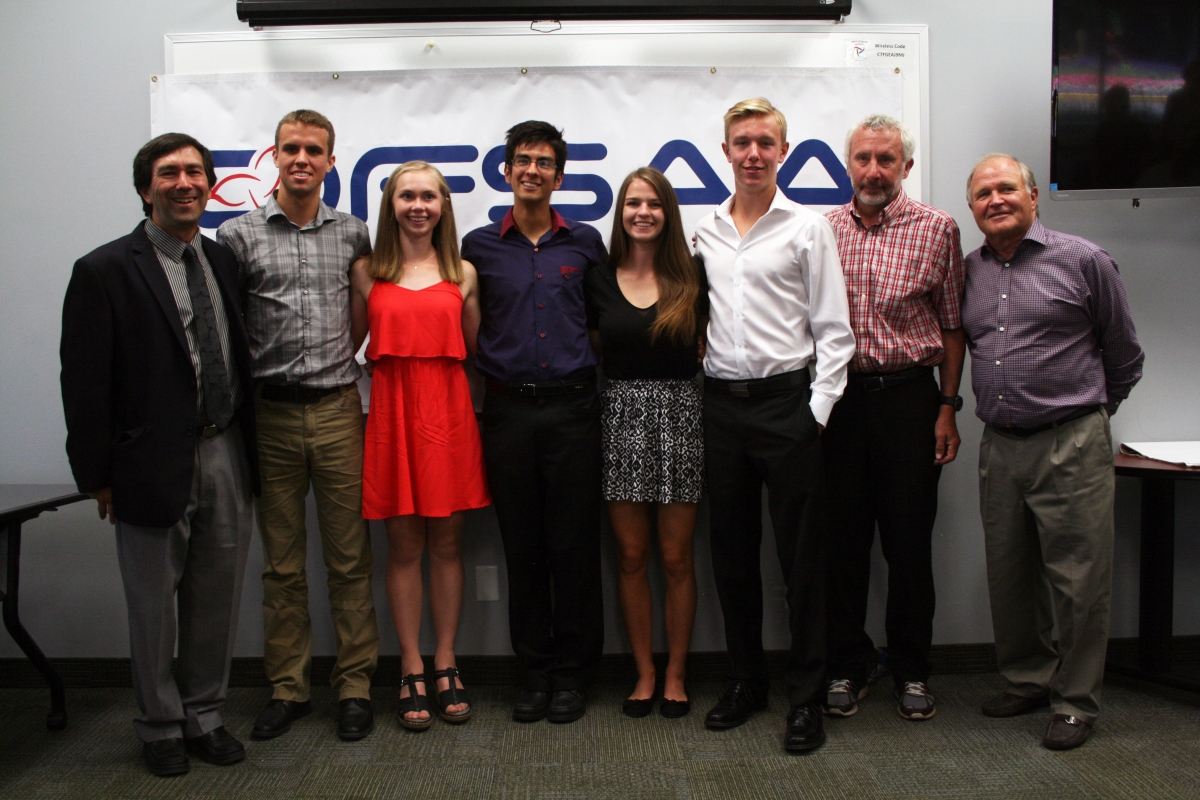 The 2015 recipients are Hannah Woodhouse of Meaford, and Sergio Raez Villanueva of Mississauga.

Hannah Woodhouse graduated from Georgian Bay Secondary School with a 94% average. Hannah finished 2nd in OFSAA cross country in grade 12 and in OFSAA track & field 3000m placed 3rd in grade 11 and 2nd in grade 10. At National Indoor Track Championships in 2015 she placed 1st in both 3000m and 1500m races, came 1st at the Canadian Cross Country Championships, and led Canada to 1st at NACAC in Columbia. She also participates in Nordic skiing and gymnastics. Hannah was a member of student council, music council, school orchestra, athletics council, and involved in promoting literacy and community water safety. Hannah will be studying biomedical engineering at University of Guelph.

Sergio Raez Villanueva is a graduate of John Cabot Catholic SS and finished with an average of 95%. He competed in OFSAA cross country every year, and at OFSAA Track & Field came 2nd in steeple chase in 2015 and placed top-10 in 3000m three times, and 1st at Athletic Ontario Indoor Championships 2015. He was student of the year in 2014 and 2013, a member of choir, tennis, badminton, and swim teams, involved in leadership initiatives with younger students and attended Students on Ice Arctic Expedition in 2014. Sergio will be studying biomedical and life sciences at McGill University in the fall.

The Brian Maxwell Memorial Scholarship Fund also organizes the Ontario Award for Excellence that presents a $1000 scholarship to student-athletes continuing to a Canadian University or College. This year, the Fund elected to recognize four student-athletes with this award. The 2015 recipients are Alison Head, Danielle Jossinet, Liam Passi, and Ben Workman.

Alison Head recently graduated from Lorne Park Secondary School (Mississauga) with a 92% average. Alison came 8th and 6th in 3000m at OFSAA Track, and 8th at OFSAA Cross Country. Alison was female athlete of the year, a member of student council, VP of athletic council, student mentor, and environmental, humanitarian, and animal welfare clubs. She will be studying honours life sciences at McMaster University.

Danielle Jossinet graduated from St. Mary Catholic Secondary School (Cobourg) with a 95% average. In cross country Danielle finished top-10 at OFSAA in grades 9, 10, and 12 and achieved success on the track culminating with OFSAA silver in 1500m and bronze in 3000m this year. She received the St Mary Gold Triple A Award, was involved in tutoring, earned a French fluency certificate, involved in rugby and ultimate teams, and Social Justice Club to assist schools in the Dominican Republic. Danielle will study biomedical engineering at the University of Guelph.

Liam Passi wrapped up his high school career at Lasalle Secondary School (Sudbury) with a 97% average, and finished 12th in 3000m and 7th in the 2000m steeple chase at OFSAA Track & Field 2015. Liam is a national champion in Muay Thai (a combative sport) and also played basketball, swimming, alpine skiing, and traveled to Kenya with Free the Children. Liam will study actuarial sciences at the University of Toronto starting this fall.

Ben Workman graduated from Kingston Collegiate (Kingston) with a 91% average. Ben qualified for OFSAA cross country or track every year of high school highlighted by 3rd in 3000m in grade 10 and 3rd in cross country this past year. He was a member of athletics association, innovators club, musicians’ guild and volunteers in the community. Ben will study human kinetics at the University of Guelph.

“I am very proud and impressed by each and every one of the Brian Maxwell Scholarship recipients,” said Jennifer Maxwell, wife of Brian. “I’m so glad that running and academics have been such an important part of all your lives. I wish you much continued success as you go on to college and beyond.”

Congratulations to all scholarship recipients and we wish you the best of luck in continuing your education and athletic careers at the post-secondary level!